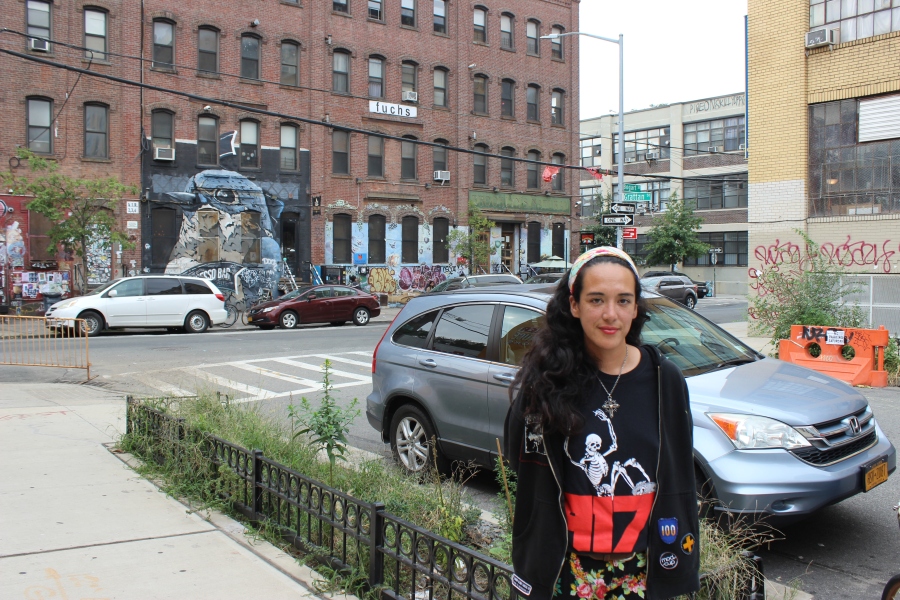 The car’s last halt before pulling over at the San Diego Sector of the United States Border Patrol was in Tijuana, at the children’s aunt’s place.

It was 1999, when the fencing on Friendship Park — the only federally sanctioned meeting point between Mexico and the United States — was a single layer. Situated between San Diego and Tijuana, the park was where women often watched their grandkids take their first steps, parents marveled at their kid’s graduation certificates, lovers exchanged rings and kisses. It was also the only place where separated family members could embrace after botched attempts to get everyone across.

In the car, a Mexican woman with an American passport set off for the United States with five children in the back seat. The oldest among them was 11-year-old Maria de Los Angeles.

De Los Angeles, now 30, lives in Jersey City, New Jersey, and tells her life story through art. Her work includes both literal depictions of scenes borrowed from the border and allegorical representations of immigration tales. After the Trump administration’s announcement of the “zero tolerance” policy in April, de Los Angeles began focusing her attention on the border crisis. Examples of her work can be seen in the exhibits “Contextualizing Fashion” at Pratt Institute and “There Goes the Neighborhood” at 107 Bowers Gallery in Jersey City.

“But,” de Los Angeles said, “it is all about stories from this side of the border and not Mexico, because I haven’t been there since I came here. So I am not speaking for them.”

De Los Angeles had hoped that by the time she grew up, the border crisis would have been resolved. Today, however, there are many added layers on the Friendship Park fence, and access is limited to weekends.

“For us it was very easy, it is not like it is now, you know like with kids caged at the border. A lot of kids die on their trek too,” de Los Angeles said. “For us, it was like the smoothest.”

After “crossing over,” she was fortunate to reunite with her parents in Los Angeles, although she never asked them how they crossed the border. Other immigrant children are so lucky. Many end up in detention cells and are then housed in shelters. According to The New York Times, the number of undocumented children detained in federally contracted shelters, most of whom are from Central America, reached 12,800 last month.

Her parents knowingly took the risk, however, leaving behind the family-owned farm for a low-income housing complex in Sonoma County, California. Her parents worked multiple jobs at farms, vineyards and in practically any service industry that would hire them. De Los Angeles said their goal was to provide their kids an education and opportunity Mexico couldn’t offer.

But when she wanted to get a driver’s license in high school and was ready to own a car, she couldn’t. Her undocumented status still had an unshakable hold on her life.

“I think it is unfortunate that it is shaping so many children, shaping who they are. They don’t feel included, they are but an ‘other,’ ” she said.

One of her concerns is that children who remain in the United States, whether protected by Deferred Action for Childhood Arrivals or by adoption by American families, seldom leave their identity behind. It wasn’t until de Los Angeles got to Yale that her undocumented status became relatively stable under DACA, making her eligible for a work permit. But as with many of the children still awaiting answers at the border, her status remains uncertain.

Congress hasn’t provided much clarity on the future of DACA. According to Politico.com, approximately 694,000 Dreamers are enrolled in the DACA program. The latest update on DACA came in early August when Texas filed a lawsuit to repeal the Obama-era program. The lawsuit received praise from President Donald Trump.

De Los Angeles’ DACA status expires on July 4, but she recently got married and may be eligible to apply for a green card.

“A lot of people ask me about my status because they want to feel sad and show that they care, but I wouldn’t ask people. It makes us vulnerable,” de Los Angeles said.

In some ways, de Los Angeles’ story is a successful one: hardworking parents, Ivy League diploma, a successful career and a promising path to American citizenship. But for many detained children, the future doesn’t look quite as bright. What would de Los Angeles say to them?

“I guess I would apologize to them. I wouldn’t be where I am now if this would have happened to me. What do you say to a child? Once harm is done it cannot be undone,” she said.

For the original article: https://www.amny.com/news/maria-de-los-angeles-immigration-1.22353638

One thought on “Maria de Los Angeles’ art inspired by immigration stories, including her own”