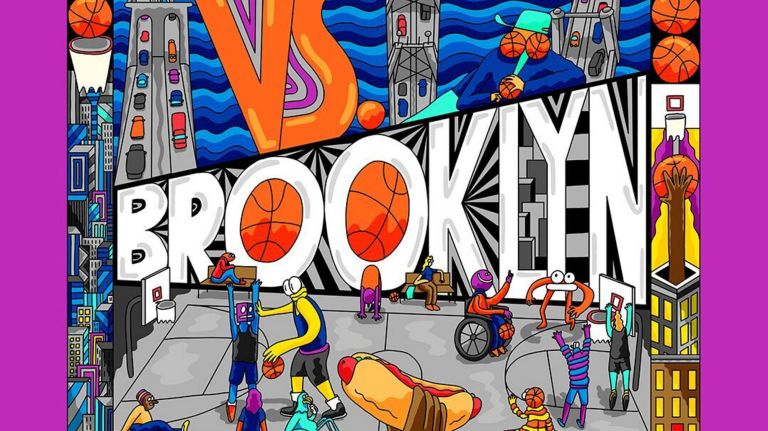 This New York Knicks poster, designed by Brooklyn artist Mike Perry, will be free for all fans who attend the Knicks’ home game against the Brooklyn Nets on Saturday. Photo Credit: Mike Perry for New York Knicks

Mike Perry’s work, which includes the animated titles of Comedy Central’s “Broad City,” books, murals, and brand collaborations, has been exhibited around the world. His latest project, however, hits home in a new way.

The New York Knicks have collaborated with Perry and Squarespace for five, free limited-edition poster giveaways at home games this season.

“Through our partnership with Squarespace, we had access to some of the most ingenious artists in New York City,” said Kristin Bernert, the senior vice president of business operations for the Knicks. “Mike’s vibrant and colorful creations stood out as a true reflection of our diverse city and team.”

Indeed, descriptions of Perry’s work include the words “color” and “vibrancy” by default. His art often incorporates fluorescent colors, psychedelic doodling, and exaggerated and squiggly typography. His studio is adorned with every color on the palette, the most prominent being fluorescent pink.

Perry, 37, thinks his fascination with neon colors stems from his 1980s childhood.

“I mean, I think I found some photos of me as a child and I am wearing like fluorescent green pants, a pink T-shirt and fluorescent shoelaces,” he said.

He often describes his mood in colors, although he confessed not everyone gets what he says. When Perry spoke to amNewYork recently, he said he felt yellow.

“Maybe because I feel like I have a lot to do and yellow is kind of like a flowing color, but I am in good mood, I feel good and the flow is going good so maybe that’s it,” Perry said. “Or unfortunately it may be based on, like, peeing or something,”

Perry, who has lived in Brooklyn for more than 12 years, relishes working on New York-centric pieces. For this project, he designed posters for the Knicks’ Nov. 20, Dec. 8, Feb. 13, March 17 and March 30 home games at Madison Square Garden, and every fan that attends those games will receive one. The most rewarding aspect of the poster project is knowing that they will stay with fans for ages.

“The thing that I like about it is the idea that you have all these kids going to all these games, ultimately having these posters on their walls, and one day they are going to look at it and reminisce,” he said.

For the next game on the poster-giveaway schedule, Nets vs. Knicks on Saturday, he drew inspiration from the various bridges that connect New York City’s boroughs.

“I really kind of focused the piece on the relationship between the bridges and islands, so kind of the center of the piece is like the three main bridges,” he said.